Conneaut Cellars Winery was founded by Dr. Alan Wolf in 1982. Dr. Wolf was exposed to winemaking when working for the US State Department in Germany in the 1950s, where he placed political refugees as winery workers. Some of these émigrés were biochemists. Later, he learned basic winemaking by enrolling in courses at the University of Würzburg and the German Wine Institute at Geisenheim. During the 1960's Dr. Wolf experimented with more than 130 grape varieties for Cornell University and The Pennsylvania State University, as well as teaching basic winemaking courses at several colleges. During the next decade, he saved and planned for starting his own winery. After retiring from education in 1981, Dr. Wolf and his wife, Phyllis, established Conneaut Cellars Winery with the mission to make a memorable and distinctive wine that reflects the northeastern climate of Lake Erie - the Lake Erie Wine Appellation.

In 1982, Dr. Wolf built the winery on the south end of the largest natural lake in the state due to the rich history of the property. Conneaut Lake is a kettle lake, formed by the depressions left by receding glaciers toward the end of the Pleistocene Era (18,000-8,000 BC). The lake’s spring-fed waters attracted abundant wildlife, and in turn, transient hunters from the pre-historic Indians to the Seneca. The first permanent inhabitants were white settlers of the 1790’s.

From the Pleistocene Era, five woolly mammoth remains have been discovered at Conneaut Lake along with evidence of mastodons and primitive elks called wapiti. The lake itself may have been used by the Big Game Hunters (ancient nomads) to preserve mammoth meat. During the Woodland Period (10,000 BC – 1550 AD), the area was not inhabitant since most Indians settled in semi-permanent towns along rivers (French Creek, Allegheny River, and Mahoning River), moving every 10-15 years to find new resources.

About 1500’s to 1660’s, the first Woodland Indian believed to dominate our region was the Erielhonan, which means long tail for panther, lion, or raccoon. The French called these Indians the Chat (Cat) Nation.The shorten form of Erielhonan is Eriez (today "Erie"). The Eriez were traditional enemies of the Iroquois, but they were defeated in a war by the Seneca and Mohawk during 1653-1657. By the time white settlers moved into the area during the late 1700's, the Seneca war chief Cornplanter, who’s principal village was on the Allegheny River, controlled and dominated the area as hunting and fishing area. Cornplanter permitted Ohio Indians, such as the Lenni-Lenape (Delaware), Huron-Wyandot, Mingo, and Shawnee, to use the area, and it was considered a neutral area. Seneca Indians were the first to call this area Conneaut (which translates “Snow Place” according to local historians), reflecting the surrounding forest was so dense that the snow melted after it had melted elsewhere.

On May 5, 1791, the first Indian attack against white settlers in this area was recorded. Cornelius Van Horne was captured by Wyandots while doing farm work near Cussewago and taken to Conneaut Lake. He was tied to a sapling near a hill overlooking the lake (Fireman’s Beach) but managed to escape unharmed. 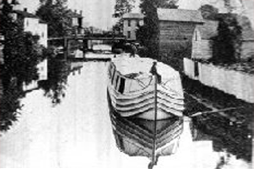 The Seneca and other transient Indians hunters’ favorite campsite was the hill next to the winery overlooking Conneaut Marsh and the Conneaut Outlet. The outlet flows into French Creek then to Allegheny River. In 1793 the outlet also lured the first white settler, Abner Evans, who used the water to power his grist mill. A village called Evansburg, named Conneaut Lake in 1892, grew up around Evan's mill and log cabin. 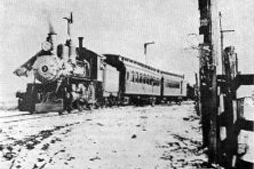 The old canal ran along the winery’s entrance driveway and is still intact just southeast of the building. But it was the advent of the railroad in the 1860's that brought prosperity to the area. The Meadville & Linesville Railroad (established 1881), later the Bessemer, occupied the towpath of the abandoned canal. The railroad was a boom to the lumber industry, especially to the Stratton & Company sawmill, which stood on the winery’s property. The sawmill was established in the 1870s and supplied finished lumber to the people of the area and over a million barrel staves a year to Oil City and other markets. 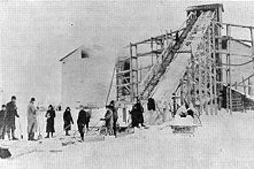 The ice harvesting industry (1880 to 1930’s) was another beneficiary. Demand for the lake’s crystal-clear ice was so great that the Conneaut Lake Ice Company built enormous sheds to store the 100 ton harvest. From these buildings, on the lake shore north of the winery, trainloads of premium ice (100,000 tons a year) were shipped to Pittsburgh and other urban markets. The railroad also fostered the development of Conneaut Lake as a summer resort. Hotels sprang up on the lake shore and a fleet of steamboats built to transport the guests to them. Visitors arriving at the train station, which stood on the winery’s property, walked to the boat landing next to the ice houses. The Conneaut Lake Exposition Park, now Conneaut Lake Park, was established in 1892 and Conneaut Lake became one of Pennsylvania’s leading resorts. 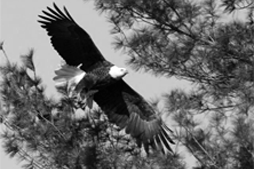 In 1983 a bald eagle's nest was established on the state game lands that borders the winery's southern property. This nest is within view from the winery and has produced many bald eagles (eaglets) over the 30 plus years. This nest is one of the three original eagle nests within Pennsylvania (all within Crawford County). The Pymatuning-Linesville area has two older nests.

Dr. Wolf passed away in 1995 leaving the winery to Phyllis. In 1996, Joal Wolf, the son of Dr. Wolf, bought the winery from his mother. As a young boy, Joal helped his father make wine during the 1960's. After graduating from college, he went to Europe for four years. While in Germany, Joal visited wineries and represented Conneaut Cellars during trade shows. Joal returned to the winery in 1988, attended graduate school, and earned his master’s degree. After graduate school, Joal worked full-time at the winery and assisted his father in all facets of the business. As Wine Master, Joal has won several international, national, and state medals for his wines. At the 1998 Wineries Unlimited show, Conneaut Cellars Winery won an International Commercial Vineyard and Winery Award as “The Most Improved Winery.” This trade show is the largest event from the Rockies to the East Coast and attracts about 950 winemaking and vineyard operators from the U.S. and Canada. Joal continues the tradition of winning awards at the State, National, and International Wine Competitions.